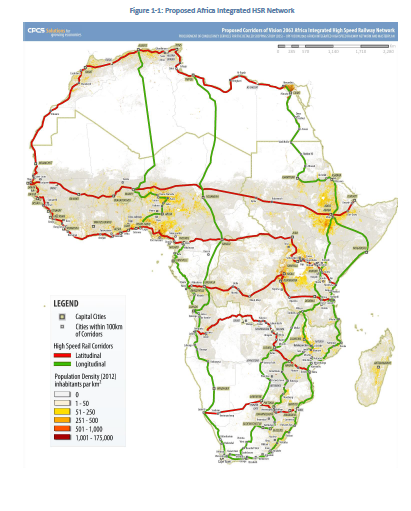 The ambitious multi-billion project christened African Integrated High-Speed Railway Network (AIHSRN) of the AU Commission aims at interconnecting African Capitals with each other to ease the movement of goods and people across African borders. It will bank on building and improving existing national railways to link Africa’s 55 countries, constructing at least 12,000 kilometers of new tracks.

The high-speed rail will pass through six major corridors grouped from the continent’s AU- recognized Regional Economic Blocks (RECs). It is designed to be a steel- web that runs through Africa longitudinally and latitudinal passing through African capitals.

The six regions are:

Speaking during an Expert Group Meeting on AIHSRN held in Nairobi this week, Mr. Daniel Osiemo, CEO, NEPAD / APRM Kenya Secretariat urged the continent to look to funding from within.

“Look at the pension funds, all over the continent we have pension funds that have been established, but which have not been channeled to productive investments,” said Mr. Osiemo. “So, if these are harnessed and put into this kind of investments, in a little time to come, they will sufficient to finance the project and this will be a win-win for everybody,” he added

This project is guided by the AU Vision: “An integrated, prosperous and peaceful Africa, driven by its own citizens and representing a dynamic force in the international arena”. This vision is the guiding principle for Agenda 2063, whose first 10-year Implementation Plan has selected Flagship Projects which include the continental high-speed rail.

By achieving an integrated Africa AU aims at having a continent that is politically united, based on the ideals of Pan Africanism and the vision of Africa’s Renaissance, whereas by a Prosperous Africa, AU strives to have a continent that is based on inclusive growth and sustainable development.