The Cabinet Secretary, The National Treasury, and Planning, Hon. Amb. Ukur Yattani accompanied by Amb. Dr. Samori Okwiya, Chief Executive Officer of the NEPAD/APRM Kenya Secretariat, and Mr. Frankline Kaburu, Communications Manager, paid a visit to Egypt’s ongoing project of the New Administrative Capital which is located 45km east of Cairo; on the way to the port city of Suez. 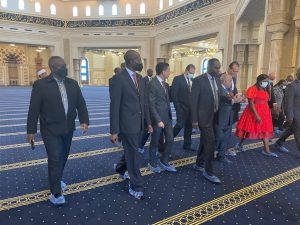 The promotional showcase tour is part of the Egypt, international promotional campaign that showcases and promotes tourism drive in the Country by the Ministry of Tourism in conjunction with the Ministry of Foreign Affairs of Egypt. The tour aimed at portraying Egypt not only as a contemporary and prime touristic destination but also shed light on the diversity of the Egyptian people and ideas on the various strategies that the country intends to use to enhance modernized, efficient service delivery to the citizens of Egypt.

In its completion, the government functions such as the ministries, parliament, and civic institutions will relocate to the New Administrative Capital in an effort to efficiently streamline government services from a modern centralized location as well as help to minimize chronic congestion issues in the current capital of Cairo.

The New Administrative Capital will be a modernized integrated Infrastructure Planning that encompasses creative architectural design, environmentally friendly Solid Waste Management system, and sustainable power and electrical provision among others.

In order to serve the populous 91% Egyptian cultural Muslim population, mostly of the Sunni denomination, the government has equally constructed Egypt Islamic Cultural Centre in the New Administrative Capital. The cultural centre houses one of the world’s largest mosques with a capacity of 107,000 worshippers and a length of 140 meters of minarets. The centre has a number of halls for various ceremonies, and chambers for teaching Koran to men, women, and children. The establishment has a parking lot and seven-story parking whose capacity is 3,000 cars.

Similarly, in an effort to enhance co-existence between the remaining 9% of the population and to promote the right of worship that the government also constructed a church for the Egyptian Christians who are Copts that belong to the Coptic Orthodox Church. Called the “Cathedral of the birth of Christ”, and housed in the New Administrative Capital the Church is the largest church in the Middle East and is located east of the exhibition project in the new capital. The church is implemented on 15 acres, which equals 63,000 square meters and has the capacity to hold some 9,000 citizens. The Cathedral Church contains the main square and papal headquarters, a reception hall, and a meeting room. The Cathedral Church contains a two-story underground garage and a service building and has two lighthouses designed for the cathedral building. The lighthouse was designed according to Coptic architecture and contains several bells at the top of the lighthouse.

The promotional showcase tour of Egypt formed part of the 21st COMESA Heads of State and Government Summit program that took place on 23rd November 2021 and the APRM High-Level Peer Review Forum on South-South and Triangular Cooperation: Building agile and resilient societies in Africa and the global South that is ongoing at the Capital of Cairo.