The meeting was opened by H.E. Dagmawit Moges, Minister of Transport, Ethiopia, who welcomed the participants to Ethiopia and affirmed the country’s support to the LAPSSET project.

The Africa Union High Representative for Infrastructure Development in Africa, H.E Rt. Hon. Raila Odinga in his remarks said that, the LAPSSET corridor has created solutions to African problems. Additionally, he acknowledged that the project has been listed as one of the 10 champion projects of the African Union PICI-an initiative coordinated by AUDA-NEPAD. 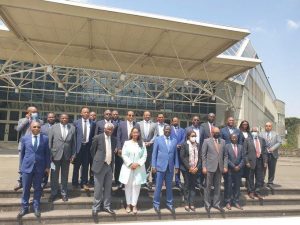 Hon. Raila Odinga noted the Kenyan Government’s commitment to implementing the LAPSSET corridor projects. The Kenyan Government commissioned the 1st berth of Lamu port on 20th May 2021 in a ceremony inaugurated by President Uhuru Kenyatta.

In her statement, H.E. Dr. Vera Songwe, Executive Secretary, ECA, reiterated the benefits of the LAPSSET corridor as a generator of employment, economic development and prosperity. She added that the LAPSSET corridor will improve peace and security at the cross border points. She also appraised the Kenyan Government for involving women in the project.

In his remarks, The Director General, LAPSSET Corridor Authority, Mr. Maina Kiondo, confirmed that 60% of roads have been completed so far.

He further acknowledged the benefits of the LAPSSET Corridor among them being enhanced tourism, improvement of social amenities, increased employment opportunities and allowing Kenyan neighbouring countries to access their goods much faster allowing for increased revenue, easier cash flow management and greater trade opportunities in the region and beyond. 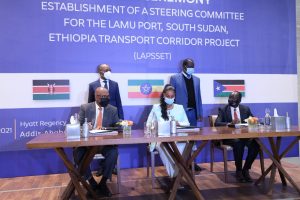 The footprint countries finally established a Steering and Technical Committee for the LAPSSET project. The committee will be led by H.E Dagmawit Moges, Minister of Transport, Ethiopia , Mr. Adan Mohammed, Cabinet Secretary for East African Community & Regional Development and Eng. Lado Tongun (Sudan).  The Committee will be tasked with working together to implement the LAPSSET project in the three countries.