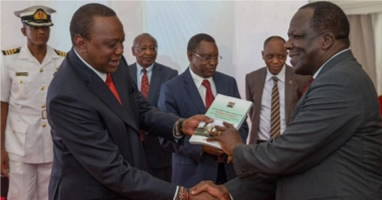 Adopted in 2003, the African Peer Review Mechanism (APRM) is a mutually agreed instrument of governance voluntarily acceded to by the Member States of the African Union (AU) as a self-monitoring mechanism. Kenya signed the APRM Memorandum of Understanding in March 2003, and in 2006, became the third African state to be Peer reviewed at the AU Banjul Summit. In January 2017, the country received accolades for becoming the pioneer of the 2nd generation review after a successful Second Peer-Review.

In January 2015, His Excellency President Uhuru Kenyatta was elected the Vice-Chairperson of the Forum for Heads of State and Government participating in APRM and subsequently became the chairperson in June 2015, a position he held till January 2018. After taking over the leadership of the forum, President Kenyatta committed himself to revitalize the mechanism which had lost much of its lustre as an innovative, homegrown and effective tool for transforming governance in Africa. The president back then said APRM would become more relevant when linked to the implementation of the AU Agenda 2063 and Sustainable Development Goals Agenda 2030.

The revitalization process during the two years of President Kenyatta’s leadership saw APRM realize considerable achievements. There was an increase in the number of countries ready to be peer reviewed, and those expressing willingness to accede to the Mechanism for the first time. The process of integrating the APRM into the African Union system as a strategy for achieving institutional stability and sustainability also progressed well.

President Kenyatta emphasized on the need for Africa to play its part in funding an aggressive reform agenda to grow the continent and improve the lives of its people. This push saw APRM member states gradually settle their arrears of annual contributions and the Mechanism attracted additional strategic partners, which include the Mo Ibrahim Foundation as well as African Capacity Building Framework (ACBF). During this period the peer review body also succeeded in having its mandate expanded. In January 2017, the AU General Assembly granted the Mechanism an expanded role to include spearheading monitoring and evaluation efforts in the implementation of Sustainable Development Goals (SDGs) Agenda 2030 and African Union Agenda 2063.

Kenya was peer-reviewed in January 2017, during the APRM Heads of State and Government Participating in APRM, held in Addis Ababa, Ethiopia. This followed an extensive country self-assessment and a country review process that involved key stakeholders and interest groups, across all the 47 counties of Kenya.

The 2nd Country Review Report highlighted the following milestones achieved since Kenya was first reviewed in 2006:

i) The promulgation of the constitution of Kenya in 2010;

i) Implementation of the two –thirds gender rule;

iii) Containing the overall cost of the devolved system and ballooning wage bill;

v) Corruption and the quest for transformative leadership; and

Following the review, the country has developed a National Plan of Action (NPoA) which outlines the president’s commitment to the implementation of the recommendations made in the report. The NPoA has been linked to the 3rd Medium Term Plan (MTP III) of Kenya’s Vision 2030 and the County Integrated Development Plan (CIDP)

The NEPAD/APRM Kenya Secretariat, in partnership with relevant stakeholders, will hereafter disseminate the report to the public, a process that will be carried out in all the 47 counties